To Patent or Not to Patent: A guide for tech entrepreneurs

This is one of the most difficult decisions tech entrepreneurs have to make.

Most tech entrepreneurs are very possessive of our ideas.  We tend to overvalue the importance of our idea and undervalue the time and resources involved in bringing an idea to market successfully.  Similarly, manufacturers, executives and end users may undervalue the time and resources taken to conduct research and development.  So we get silo-like situations where customers complain about companies charging high prices for important technologies, executives complain about how much R&D costs them, and how many unexpected delays there are in it, and engineers and developers demand more compensation and recognition of their work.  The current system of patents is a very imperfect answer to the question: “how do we fairly compensate the people who conduct the R&D?” since they aren’t selling a concrete, tangible good.

But how does this help you choose whether a patent is right for your tech idea or company?

I spent months agonizing over the decision on whether to patent a foldable propeller shroud system for a multi-rotor UAV.  In the end I decided to go ahead with it, although I’m still not sure it was the correct decision.  The patent cost me about $10,000 in drafting and filing fees (while you can file a Provisional application yourself, I don’t advise filing the final patent without a lawyer’s help.  Mine did a really good job on writing a defensible patent.)

What’s more, it has cost me a lot of my time writing the draft to send to my lawyer, checking and evaluating the lawyer’s work, and responding to numerous revision requests from several countries’ patent offices.  They object to the particular way the drawings are drawn.  The lines aren’t black enough, or clear enough, or there are lines they don’t want on it.  This time doesn’t include the time spent researching prior art and other patents, because you should be doing that anyway (more on this later).

But it’s all time and money spent on an abstract process which doesn’t relate to building a better product for your customers.  In fact, focusing time and energy on the patent was one reason I missed a major opportunity to demonstrate a working product to a big-time customer.

You’re the guy on the phone to your patent lawyer.  The girl on the left is your customer.

There are three reasons most people want to get a patent.  They are:

Despite being the most common thing you hear from would-be inventors, number #1 is by far the worst reason to patent something if you are intending to run a business where you manufacture and sell directly to customers.  #2 and #3 are actually valid reasons to get a patent (more on this later).

As I said earlier, inventors are very possessive of their ideas and being worried about copycats is the worst trap to fall in to.  Your competitor may do something like what you’re doing, or even copy you outright, but it doesn’t really matter unless it cuts in to your sales. 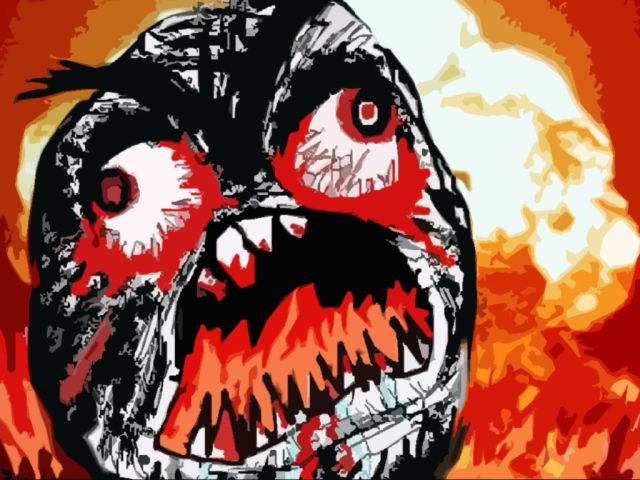 No, it really doesn’t, get over your apoplectic rage about THEIR NERVE TO COPY “MY” IDEA.  “MIIIIINNEEE!!!!!!”

If it does cut into your sales, then they are probably offering a significantly better service than you, or your price is way too high and you are relying on your presumed exclusivity to price it that way.  I once saw a patented evaporative air cooler selling for $200 and hundreds of identical clones selling for about $15.  This is bad, exploitative pricing by the patent holder.  If I’m a customer, I don’t care if these people say they invented it and whine that the clones are unfair, I’m going to go with the one that is 12x (or even 2x or 1.5x) cheaper if I’m confident it’s made with reasonable quality and the customer service is good.  And don’t even try and argue that simply because you’re a Westerner, or simply because you’re the inventor, you are providing better quality or service, because it’s simply not true and people know that.

So patents don’t make you exempt from competing (in fact, one good reason not to get a patent is because it will give you a false sense of security).  But there’s more to it: there are thousands of loopholes one can exploit to avoid a patent.  For example, this patent on controlling a multi-rotor UAV in forward-flight using thrust differentiation is very easily circumvented by the addition of one single traditional aerodynamic control surface.  How much did that patent cost the inventor?  Probably something like what mine cost.  And they have gone ahead and publicized their whole idea online for someone to “use as inspiration” for a slightly different idea.

There are very few real-world examples of successful patent prosecutions, especially by small companies.  Apple, Samsung, and Bell may not even be benefitting from their massive legal brawls.  Companies care a lot more about fighting each other than their customers do.  Top and mid-level executives get immersed in their 50, 60, 80+ hour a week corporate culture that trains them to see competitors as an existential enemy, while consumers just look for the best deal.  Small business owners, who are similarly immersed in their work, tend to react emotionally to competitors in a way that doesn’t really make sense to an outsider.

In most cases, the patenting company has spent a lot of resources on defending something very specific whereas the real world of technology and commerce is fluid and dynamic and the potential number of ideas is infinite.  Anyone who’s ever argued with their spouse knows that being the plaintiff or accuser is a disadvantage as you are putting it on yourself to provide proof, specifics, etc. and all the other party (who is un-invested) has to do is deny, react and adjust.

If the non-patenting company is wise, they will have kept on top of all the relevant patents out there via regularly searching Google Patents, Espacenet etc. and will have already adjusted their product to avoid potential litigation, without spending a dime or much of their time, or opening themselves up to liability for profits already made.  This is the position that I suggest businesses who intend to sell directly to customers adopt.  There are many successful examples: GoPro doesn’t have patents, and neither does Alpacka Rafts.

They really are good rafts.  Probably took that time and money saved on dealing with lawyers and officious, bureaucratic patent offices and spent it on making a better product.

When I asked Alpacka for a sample of their fabric for an unrelated project, they wrote back politely to say “our fabric has been developed and optimized over 15 years and is a trade secret”.  Would someone who had a patent be as careful about letting their competitors know how they do things?

So, in summary, if you are planning to sell your idea as a product to customers on your own or in a small business you build, a patent is a really bad idea.  Focus your energy on what you provide to your customer.  “Rugged” “durable” and “compatible” are value propositions to a customer.  “Patented” is not.

However that doesn’t mean patents never have value.  If you are focused on improving the valuation of your company for an investment run, then a patent will definitely help.  We don’t mean to disparage investors here, but this may or may not have any grounding in reality due to the reasons mentioned above. Although, we admit, certainly once you have SIGNIFICANT financial backing, an actual patent prosecution of a competitor may become more within the realm of possibility.  Rich or large companies who have raised a couple of big investment rounds may see the filing cost and the potential prosecution cost as very small compared to the potential benefit.

Other funders (like some government innovation grants) can sometimes have the same general opinions that private investors do – that you aren’t a serious company unless you have a patent.  You may want to consider a “check the box” patent that you don’t spend a lot of time or money developing or defending, just to sway over some conservative minds who can help you – but be careful about staying true to your vision.

Of course, if you are planning to license your technology to an outside manufacturer, then you also need a patent.  You’re going to be giving them all your prior work, and without the threat of legal liability they’ll simply walk away with it.  Get a patent.  But make absolutely sure that this is your plan from the get go.  Before you even contact a patent lawyer, make a plan for how long you are going to spend developing the technology, who you are going to contact to try and license it from you (if you have an outdoor sports clothing idea your list might include Columbia Sportswear, Kathmandu, and about 40-50 others) and when.  Plan key decision points where you will evaluate your goals and decide whether to continue or not.  Too many people just start with an idea, think “I should patent this”, and then end up with an expensive asset that they can’t sell or license.

Whatever you decide, try to remember that the most important thing is focusing your resources (time, money, energy) on things that matter to you.  It’s not really about the money you might make or lose.  You can’t know that.  The decision on whether to patent determines what you will spend your time doing.  If your dream is to keep coming up with ideas, drawing them up, and moving on to a new idea soon after, and you don’t mind working in an abstract legal world of filings, cease and desist letters and extensive document preparation, you might be perfect for an intellectual property licensing strategy.  If you really thrive off dealing with customers, providing good service, being hands-on with manufacturing and assembly operations, employing people and coming up with commercially-focused improvements and innovations, just remember to focus on what matters to your customers.